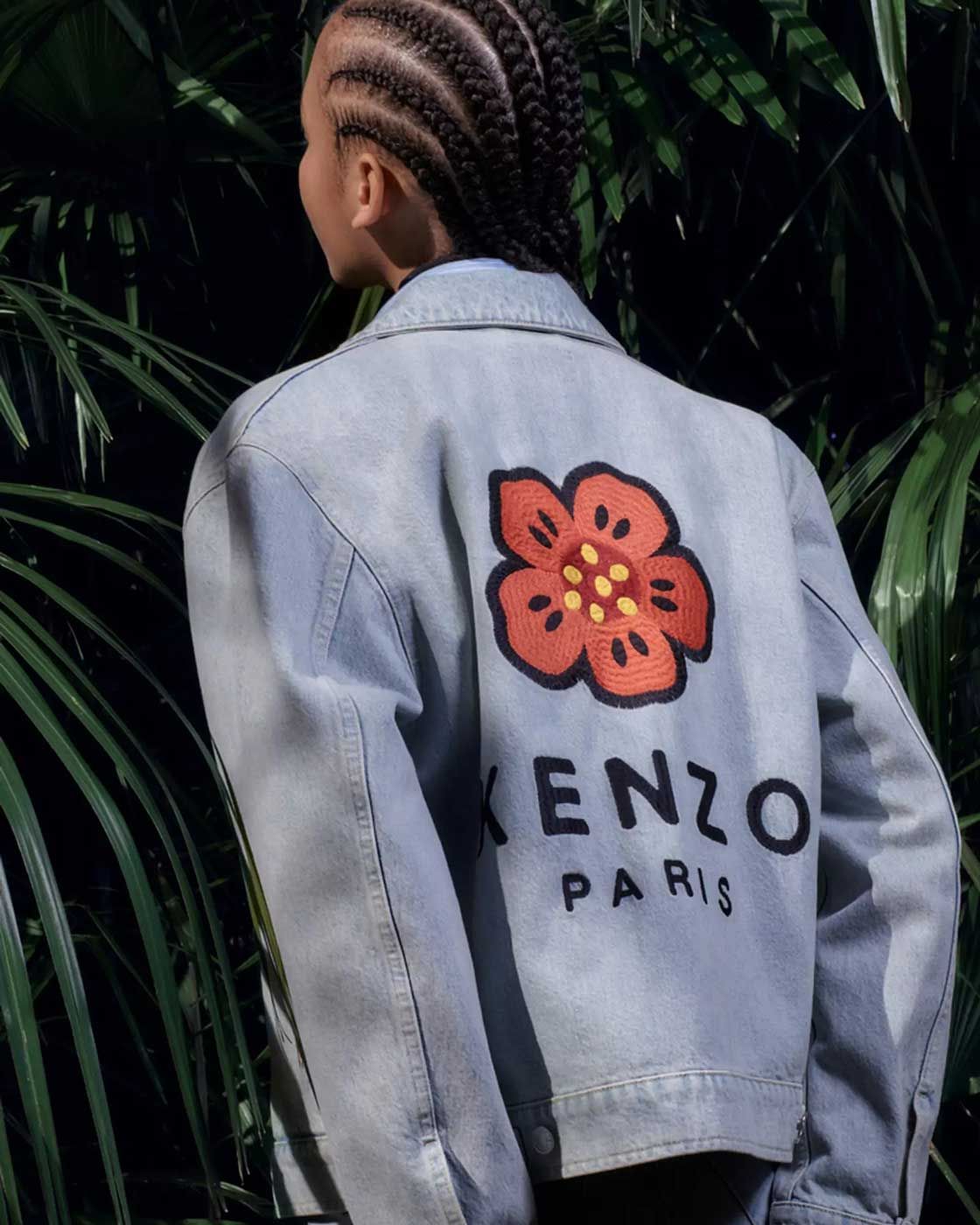 When was Kenzo founded?

Where is Kenzo based?

Who is the founder of Kenzo?

Who is the CEO of Kenzo?

Who is the new Kenzo designer?

Kenzo is a French fashion brand founded in 1970 by Kenzo Takada, born in Japan and moved to Paris in 1964. Owned by the luxury conglomerate LVMH, the label is known for its Asian influence on traditional European designs, delivering borderless fashion that celebrates cultural diversity.

The house’s blend of prints, elegant colors, and signature motifs adorn everything from tees and sweatshirts to accessories and homeware and has been adopted by celebrities and fashion icons from Rihanna, Beyoncé, and Lorde to Michelle Obama and Jay-Z.

Takada was the master of mix-and-match aesthetics. He distinguished himself from his rivals in Europe with his designs – a completely square-cut sweater. We can see these boxy shapes intertwined in his collections to this day.

What does Kenzo mean?

Kenzo is a person’s name originating from Japan, and in direct translation, it means “strong and healthy.” The name is, however, widely known thanks to Japanese fashion designer Kenzo Takada who made the name internationally recognized as a luxury fashion label.

Is Kenzo a luxury brand?

Yes, Kenzo is a luxury brand owned by its parent company LVMH. However, the brand does have slightly more approachable price points than its European counterparts. This is why it is often considered an entry-level luxury and one of the more attainable designer brands within LVMH’s brand portfolio.

Since 1993, Kenzo brand has been owned by its parent company LVMH (also knowns as Moët Hennessy Louis Vuitton or Louis Vuitton) – a luxury goods maker with brands like Moet & Chandon, Veuve Clicquot, Givenchy, Christian Lacroix, and Christian Dior in its portfolio.

At the time of the acquisition, Kenzo’s revenue totaled around $144 million, and LVMH acquired the company for about $80 to add to its fashion and accessories division.

Does Kenzo run small or big?

Kenzo clothing doesn’t generally run small or big, and is usually true to its size. Still, sometimes the confusion comes from its boxy or oversized cuts. For example, we have noticed Kenzo t-shirts run small, whereas jumpers tend to run large. According to your fit preference, check the size guide on their website when ordering, as they usually have a recommendation in the product description.

It is also worth noting Kenzo shoes use European sizing, which can bring some discrepancies in the fit and mean that some sizes aren’t shown. If that is the case, order a size up to be safe.

How much is a Kenzo shirt?

Whereas t-shirts start at around $170, with the most expensive retailing at about $350, you can cop a Kenzo shirt, sweatshirt, shoes, trousers, or a hoodie for anywhere between $325 to $700. For larger pieces such as jackets and tailoring, however, you’ll have to come up with more than $700 moving up to nearly $1,300.

What is the Kenzo logo?

Even though some consider the poppy indicative of the brand, it is widely known as the brand with tiger logo. The iconic Kenzo tiger print appeared more prevalent after former creative directors Carol Lim and Humberto Leon took over.

Their decision to remove the brand’s previously iconic flowers was initially met with criticism in the industry. Still, it became part and parcel with their approach to the label’s vision. In recent years, however, flower prints have returned, incorporated in Nigo’s first Kenzo collection, the new creative directors’ vision.

Where can I buy Kenzo clothing?

You can buy Kenzo clothing directly at the Highsnobiety shop.

Kenzo Takada, born in a small village in Himeji, Hyogo, Japan, in 1939, traveled to Paris after studying at Tokyo Bunka Fashion College with the desire to become a fashion designer.

Kenzo opened his first boutique called Jungle Jap, located in Paris at Galerie Vivienne. Its walls were decorated with jungle-inspired interiors based on Henri Rousseau’s painting “The Dream” (1910).

After presenting his 1971 fashion collection, one of Kenzo’s collection pieces appeared on the cover of Elle Magazine, rising interest of international buyers which propelled his success.

After international exposure, his success grew. Kenzo Takada opened more independent shops across the world, including one in St Tropez, two in Germany, and one in New York.

Kenzo renamed Jungle Jap store to KENZO after a backlash regarding the name from the US audience.

On the design side, he had great success with his 1983 collection, in which he mixed vibrant prints and checks, played heavily with flower patterns, and incorporated Kimono cuts and his trademark, the iconic tiger print.

Expanding on the womens clothing line, Kenzo kids and homeware line called K-3 are added to the assortment in 1987.

Followed by fragrances in 1988, with the most notable one being flower by Kenzo perfume.

Takada’s clash with his then-current business manager led to a takeover of the KENZO clothing brand by a large fashion conglomerate, a luxury goods seller LVMH. The brand was acquired for around $80 million. Takada stayed on as the head designer, developing the brand’s fashion direction.

Kenzo retired – six years after the brand was sold to LVMH.

1999 to 2003 was a new chapter in the brand’s creative direction when Gilles Rosier took over designing the Kenzo women’s collection, and Roy Krejberg oversaw the Kenzo men’s clothing, later Gilles took over the whole house as a head designer.

After Gilles Rosier, Antonio Marras is appointed as the new artistic director of Kenzo, looking after accessories and ready-to-wear ranges. A year later, the first collection launched under his artistic direction, presented in Paris. Similarly to Takata, he drew inspiration from different cultures, and his creations reflect multiculturalism and identity.

Marras is appointed as the new creative director overseeing the entire collections and Kenzo brand. However, by the end of 2011, the brand was barely profitable, making an estimated $197 million a year.

While browsing through Kenzo’s design archives, looking for a new design element for a fresh take, they discovered a small tiger printed small on some items. They designed knitted jumpers with large tiger prints that appeared in the Kenzo FW12 collection, following a huge success.

Later, tiger print sweaters and t-shirts got added to the collection and were spotted on numerous celebrities, including Rihanna and Beyoncé. After which, the iconic tiger motif became one of the most well-known prints of Kenzo clothing.

The era also brought various collabs, including Vans x Kenzo in 2012, Kenzo x H&M in 2016, and Britney Spears as the face of Kenzo’s La Collection Memento No. 2′ campaign.

After eight years at Kenzo, after the duo’s SS20 show, Leon and Lim both parted ways with the brand, citing a focus on developing their own clothing line as the main reason for stepping down.

On the 4th of October 2020, Kenzo Takada, aged 81, passed away from Covid-19-related complications at the American Hospital of Paris, Neuilly-sur-Seine, France.

In September 2021, KENZO appointed Nigo as their new artistic director, starting a new era for the brand.

Nigo is a Japanese streetwear fashion designer and DJ, most known for his clothing line, A Bathing Ape® (Bape).

In an attempt to appeal to the younger generations, LVMH hired Nigo to bring back streetwear influence.

26 French Brands Every Highsnobiety Reader Should Know in 2023
SelectssponsoredDecember 7, 2015

Body Your ‘Fits With These Crossbody Bags
StylesponsoredFebruary 4, 2022

These Crewnecks Will Have You Wishing For Sweater Weather
StylesponsoredJanuary 5, 2023

It Isn’t Your Eyes, KENZO SS23 Is Supposed To Be Pixelated
StylesponsoredJanuary 4, 2023

The Best Winter Accessories for Those who Are Always Cold
SelectssponsoredNovember 25, 2017

Nigo Just Might Be the Best Appointment LVMH Has Ever Made
CulturesponsoredJanuary 24, 2022
Search Results
Load More
Account