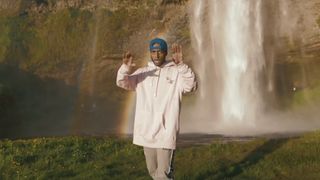 Last week, 6LACK officially returned with a new solo single dubbed “Switch.” The track followed a recent collaboration with Ty Dolla $ign on Khalid. Now, he’s shared another song called “Nonchalant” along with the accompanying visual which shows him being reflective on the beach all by his lonesome. There’s nothing like an ocean view to clear the mind and instill a fresher perspective. 6LACK has yet to reveal the release date for his forthcoming album which remains untitled at this time.

Highsnobiety recently sat down with 6LACK ahead of his set at ØYA in Oslo. During the discussion, he detailed what fans can expect from his sophomore album. Read the entire interview here. In the meantime, watch his latest music video above.

nonchalant out now. link in bio 💌

In other news, Chance The Rapper’s recent appearance on ‘Wild ‘N Out’ was epic. Peep it right here.

The North Face’s New Black Series Collection Is for the Modern Explorer
StylesponsoredFebruary 18, 2020