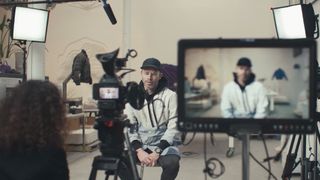 This week, adidas Originals revealed the latest installment of its new collaborative project with Daniel Arsham.

Following on from Arsham’s interactive phone booth installation at KITH NYC and the appearance of an anonymous Tumblr page providing glimpses behind the curtain of the artist’s recent creativity, the latest chapter in adidas Originals’ collaboration with Arsham takes the form of a short film, titled Hourglass.

In a recent interview with Highsnobiety, Arsham expressed his understanding of adidas as “a brand that always had this sort of connection to the past”, and this latest installment of their collaborative venture explores this connection within the framework of Arsham’s own youth.

Inspired by the American artist’s childhood growing up in Miami and his experience of Hurricane Andrew, one of the most destructive hurricanes to ever hit the US mainland,
Hourglass translates the central concepts of the collaboration into a new visual form, with familiar elements returning in new contexts.

Interwoven with footage of present-day Arsham being interviewed at his New York studio, as well as at his recent exhibition at the High Museum of Art in Atlanta, the film examines a recurrent theme of Arsham’s creative process – the influence that past experiences have upon our present selves.

As a result, seemingly-innocuous artifacts scattered around Arsham’s studio acquire greater significance as the film progresses. A wave machine triggers memories of sitting on the beach during Hurricane Andrew’s approach; the carefully-raked blue landscape of Arsham’s Japanese zen garden mimics a memory of running his hands through the sand as he sits on the beach; and the reappearance of an hourglass timer throughout ties the narrative together, alluding to Arsham’s fascination with time, memory and trauma.

What emerges most clearly during the 11-minute film is Arsham’s belief in the transience of the present day in the shadow of an enduring past. As he says himself during the video, “This moment is like a knife’s edge. It doesn’t really exist.”

As a result, Arsham identifies memory as a core element of his creative process. He describes his memories not as a record of what has happened, but as a form of prediction of things to come, and the affect his own artwork has upon him, transporting him back to pivotal moments in his life, reinforce this. Most importantly, Arsham expresses a desire to reform traumatic experiences from his childhood as a form of therapy; turning the negative into something positive, assigning it new meaning in the present.

This interplay of past, present and future becomes even more pertinent with the emergence of a strange figure near Arsham’s family home in Miami. As the young boy cycles through his neighborhood in the evening before the storm, he gets lost, stopping to ask a stranger for directions. As their conversation progresses, it becomes apparent that the old man knows more about Daniel than he realizes, and it emerges that Daniel is, in fact, talking to his future self.

Between past, present and future, a single recurring object solidifies Arsham’s preoccupation with time. A small hourglass sand timer unearthed in the aftermath of the hurricane, in the blue sands of his Atlanta exhibition, and in the possession of the enigmatic elder Arsham, alludes to a deeper significance of time in the film, as well as Arsham’s enduring fascination with causality.

Beyond the film’s conceptual significance, at certain points we get glimpses of what appears to be a collaborative adidas Originals x Daniel Arsham shoe, though this has yet to be confirmed. That being said, in our recent interview with Arsham, he describes looking for iconic objects to replicate in his work; artifacts with a wider relevance in culture. He tellingly ends with, “the thing that I looked for in adidas also has that quality.”

As for what that thing might be? Well, with the young Daniel seen wearing a pair of New York sneakers as he rides around his neighborhood listening to “Rebirth Of Slick (Cool Like Dat)” by NYC hip-hop trio Digable Planets, it’s probably fair to guess what the collaborative product might be if it eventually releases.

And considering the film concludes with an ever-enigmatic “To be continued…”, you’d be best advised to stay on the lookout over the next few days for whatever the collaboration produces next.

Watch the film and then check out our interviews with Daniel Arsham above. Follow our Facebook page for further updates and videos, and follow @adidasOriginals and @DanielArsham on the ‘gram if you’re not already.