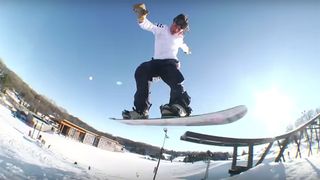 While roaming around areas both familiar and new, the crew utilizes virtually all the terrain they come in contact with. The visual was directed and edited by Colton Feldman, featuring a blend of 16mm and HD footage.

In speaking on the breakout star, Tommy Gesme, adidas Snowboarding Team Manager, Alex Sherman, had this to say: “Tommy’s style and approach to the snowboarding he does is something people wish they were born with. He’s on top of his game and definitely deserves to be added to the list of global pros on our squad. He’s blessed us with multiple video parts over the years but he’s really just getting started and will continue to put his stamp on freestyle snowboarding for years to come.”

For more, be sure to check out adidas Snowboarding’s sustainable FW18 collection.

Work From Home
Setting Up the Perfect Home Workout Doesn’t Have to Be Expensive
SelectssponsoredMarch 23, 2020