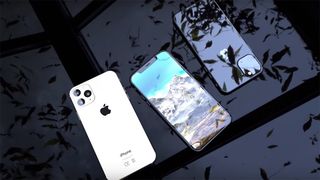 Rumors never seem to die down when it comes to Apple‘s latest iPhone. So as we’re nearing an expected announcement in September, reports surrounding the iPhone 11 continue to stream in at a rapid rate.

Here, courtesy of ConceptsiPhone, we get what is said to be an “official” look at Apple’s next iPhone model. The brief clip shows two colorways, zooming in on the overall design of the device.

The highlight of the video is the iPhone 11’s triple camera system on the back, which is expected to be included exclusively on the iPhone 11 Max. The 5.8-inch iPhone 11 is rumored to feature the familiar dual-camera setup.

Reports suggest that Apple will be releasing three iPhone models this year, including two OLED and one LCD version. The successor to the iPhone XR is rumored to feature an LCD screen and a dual-camera system.

Again, Apple is expected to announce the new iPhone at an event in September and then launch the phone in the fall. While we wait for more concrete information, you can get a look at the rumored iPhone 11 design via the video above. Let us know what you think about the device by leaving a comment below.

Apple Will Live Stream Its iPhone 11 Reveal on YouTube for the First Time
DesignsponsoredSeptember 8, 2019

Here’s How Much It Costs Apple to Make an iPhone 11 Pro Max
DesignsponsoredOctober 16, 2019