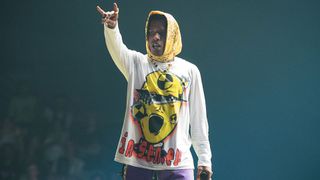 While he remains detained in Sweden due to an assault charge, A$AP Rocky appears on a new track this week from Norwegian DJ and producer Alan Walker. Titled “Live Fast,” the tune serves as the new theme song for PlayerUnknown’s Battlegrounds mobile.

I’m so excited to finally share with you all my brand-new single #LiveFast in collaboration with @asaprocky! So amazing to work on another official @pubgmobile theme song. Check it out and let me know what you guys think, link in bio!

You can stream the track from Rocky and Walker above. The official lyric video features motion graphics by Wirat Johansen.

Alan Walker continuously remains in the top 100 most popular artists on Spotify. He has performed for more than 500 headlining shows and festivals, including Coachella, Tomorrowland, Ultra, and Lollapalooza, among others, all while supporting global superstars such as Justin Bieber and Rihanna.

As for A$AP Rocky, The New York Times reports that the Harlem rapper has now been charged with assault stemming from an altercation that occurred in Sweden on June 30. If convicted, he could face up to two years in prison. Follow here for a complete timeline of Rocky’s arrest.

Live Updates From Swedish Court as A$AP Rocky Is Released From Custody
MusicsponsoredAugust 2, 2019

Here’s How You Can Get Flossy Nails Like A$AP Rocky
SelectssponsoredOctober 24, 2019

A$AP Rocky Would Like to Inform You That He’s a Fully Committed Vegan
LifesponsoredAugust 28, 2019
Follow
Highsnobiety Music
What To Read Next
Load More
Search Results
Load More