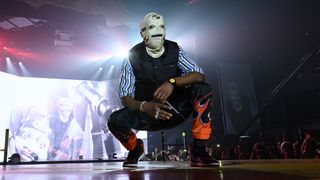 After linking up for a portion of A$AP Rocky‘s “Injured Generation” tour, up-and-coming St. Louis rapper Comethazine and Rocky now deliver a new collaboration with the “Walk” remix. The original version of “Walk” is Comethazine’s biggest release to date, having amassed more than 103 million streams across all platforms.

Zane Lowe premiered Comethazine and A$AP Rocky’s “Walk” remix today on Apple Music’s Beats 1 Radio. The song finds Rocky named-dropping comedian Katt Williams, referencing his infamous 2016 fight with a teenager, as he raps, “In the back, slap n*****, I even smack childrens, Walk around like Katt Williams.”

Comethazine will soon be embarking on an international extension of his “Bawskee 2” tour in support of his recently-released mixtape of the same name. Bawskee 2 features the aforementioned original version of “Walk.”

Men Want to Wear Purses, They Just Don’t Know It Yet
SelectssponsoredJanuary 24, 2019