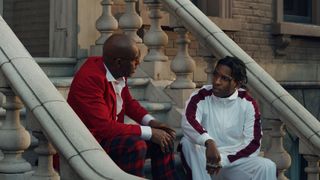 New Yorkers A$AP Rocky and Dapper Dan star in AT&T’s new short film chronicling Harlem street style. The picture shines a light on the story of Dapper Dan who has gone from the tailor of Harlem to collaborating with one of the most prestigious fashion houses in the world in Gucci.

The film is a progression of AT&T’s first-ever (212) Day — an event dedicated to celebrating the heritage and influence of New York’s 212 area code as well as Harlem street style — and a roundtable discussion moderated by Fab 5 Freddy, featuring A$AP Rocky, Dapper Dan, and Teyana Taylor with designer Jerry Lorenzo. During the roundtable this group of insiders detailed Harlem’s impact on fashion.

Kings of Style provides us with an up-close look at the progression throughout Dapper Dan’s career, from the ’60s to today. We see pivotal moments from his life, as he sells garments from his trunk, chops it up with locals, and even has his studio raided by the authorities

After watching the Kings of Style short film starring A$AP Rocky and Dapper Dan, visit AT&T’s CodesofCulture.com for more on the initiative.

A Fan Tried to Steal A$AP Rocky’s Shoe During a Concert & the Rapper Was Not Pleased
MusicsponsoredApril 8, 2019