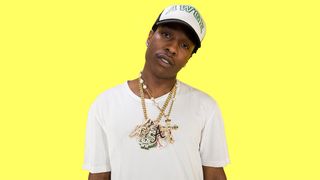 Following the release of his third studio album, Testing, A$AP Rocky got together with Genius for the latest episode of Verified. During the installment, Rocky in turn dished on one of the standouts from the project, “Praise The Lord (Da Shine),” featuring grime superstar, Skepta.

“We was all in London at my spot, Skeppy came through,” the A$AP Mob frontman began to reminisce. “I had this psychedelic professor and he studies in LSD. I had him come through and kinda record and monitor us to actually test the product while being tested on. We did the rhymes all tripping balls bro. Niggas was high. We were just smoking mad weed and it was just like, it was amazing bro. It’s a gnarly situation, so it’s just kind of hard to even try to describe, especially to sober people.”

To hear more from Rocky surrounding “Praise The Lord (Da Shine),” press play above, then see how the internet reacted to his newly released Testing album.

In other music news, Quentin Miller has responded to Drake and Pusha T on new track, “Destiny (Freestyle).”