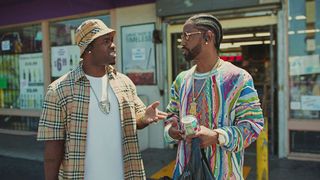 After performing the track at this year’s VMAs, Big Sean unleashes the music video for his latest single, “Bezerk,” featuring A$AP Ferg and produced by Hit-Boy.

All three artists appear in the clip, which begins with Sean and Ferg hitting up a local convenient store to grab some snacks. While outside in the parking lot, they come across a young girl who seemingly transports them to an alternate universe.

Press play above to watch the video for “Bezerk,” which is directed by Big Sean, A$AP Ferg, and Mike Carson.

“Bezerk” is slated to appear on Sean’s new album, Don Life, in addition to the project’s first two singles, “Overtime” and “Single Again.” Don Life is reportedly finished, but a release date has yet to be announced.

Sneakers as Seen on Celebrities, Presented by GOAT
From A$AP Ferg to Aleali May, Shop Sneakers We’ve Spotted on Celebrities
SelectssponsoredMarch 31, 2020