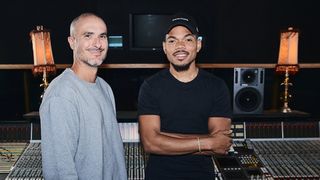 With the release of The Big Day, Chance the Rapper made an appearance on Zane Lowe’s Beats 1 radio show. At his home studio in Chicago, the pair sat down to discuss Chance’s wedding, his relationship with Kanye West, plans to move to Atlanta, and more.

“Faith is what let me married. Faith is what got me to being able to make an album. I’m only 26, but a lot of crazy shit has happened in my life,” he states.

Addressing what he feels is a misconception about his life’s work, Chance pointed to multiple moments in his career as showing his emotional range and also explained his views on legacy. “There’s a caricature of me that’s, like, I only make happy songs or songs for babies and stuff like that,” Chance said. “In fact, I make a lot of sad songs. Like a lot, a lot of sad songs. A lot of slower melancholy songs on most of my projects. I think I’ve always made music about death.”

Speaking on his “fellowship” with Kanye West. Chance says, “Ye’s number one thing is that he tells me is he talks about being the light of the world. He talks about being someone that can openly be me. I can’t pinpoint the moment Ye had his meeting with God, but he does often reference me when he talks about it. I think fellowship is the most important thing”.

On his latest “On the Run” track, Chance opens up about moving his family to Atlanta; Lowe had him expand on why he feels the need to relocate from what he’s known in the Chi. “That was the first concept for the album. I live in a very specific space where there’s things expected of me and relationships I have to tend to all the time,” the 26-year-old said after hitting his Juul. “It’s very tough to up and move to Atlanta. I’m thinking about it, but it hasn’t happened yet. Peace is the best word in the world.”

Watch the full 30-minute interview above.