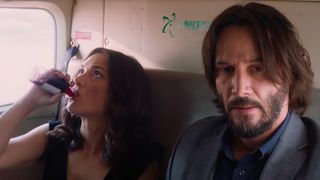 Bill & Ted 3 isn’t the only thing Keanu Reeves has in store, as the veteran actor is once again alongside Winona Ryder in upcoming romantic comedy, Destination Wedding.

Reeves and Ryder star as Frank and Lindsay, a pair of strangers who meet on their way to a destination wedding. Upon arriving, they quickly learn that they have virtually no connection to the other guests, therefore they are forced to be miserable with one another. Sparks then fly as they begin to develop a mutual affection despite themselves.

Press play above for your first look at Destination Wedding, scheduled to premiere August 24.

In other movie news, Tom Cruise dodges death in the new trailer for ‘Mission: Impossible — Fallout.’

Keanu Reeves’ 8 Best Movie Looks & How to Get Them
SelectssponsoredMay 20, 2019
What To Read Next
Load More
Search Results
Load More