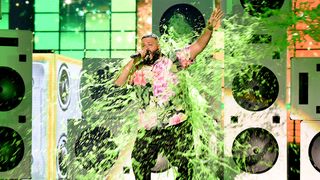 DJ Khaled announced the release date of his forthcoming Father of Asahd album in true Nickelodeon style; while getting slimed. Khaled closed out the 2019 Kids’ Choice Awards on Saturday night in his signature, self-promoting style. Take a look at the video.

Earlier in the ceremony, he took out the prestigious “Favorite Collaboration” category for his hit, “No Brainer,” featuring Justin Bieber and Chance the Rapper.

FAN LUV THANK YOU FOR THIS AWARD ! ANOTHER ONE ! Thank you @nickelodeon!! Trust me I got more coming!! #FATHEROFASAHD MAY 17! Bless up @justinbieber @quavohuncho @chancetherapper we did it!! @wethebestmusic @rocnation @epicrecords @poobear @scooterbraun

Like he said, Father of Asahd is out May 17.

DJ Khaled Is Still Mad About ‘Father of Asahd’ Not Getting No.1
MusicsponsoredJune 7, 2019