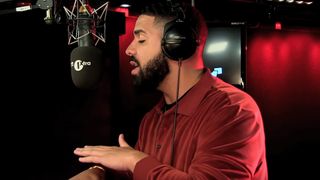 As part of the press tour for his recently-dropped Scorpion LP, Drake stepped into the studio with Charlie Sloth to record his own freestyle for BBC Radio 1Extra’s legendary Fire in the Booth series. The clip clocks in at just over seven minutes long, and sees Drake touch on his recent drama with Pusha T, as Sloth peppers the track with gratuitous sound effects, as he always does.

The freestyle follows on from Drizzy’s recent surprise appearance at London’s Wireless festival — which you can watch here — and earlier in the week, the megastar was spotted shooting a new video in the Big Smoke, too.

Check the video out in the player above, and for more Drizzy freestyles, check out the rapper’s recent “Behind Barz” clip.

Drake Is Running Through the 6 With His $100,000 Patek Philippe Watch
MusicsponsoredAugust 4, 2019
Follow
Highsnobiety Music
What To Read Next
Load More
Search Results
Load More