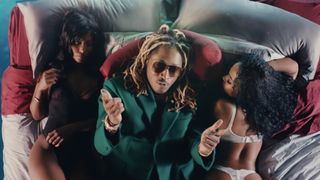 Future just dropped the video for “Goin Dummi,” the latest single off his seventh studio album The WIZRD.

Future taps into his inner Aquaman for the visuals, which start off with the rapper chilling above water, before delving into an aquatic word complete with mermaids and synchronized swimming, watch it above.

Since the album dropped back in January, Future has steadily been sharing visuals. The video for “Goin Dummi” arrives after the rapper dropped visuals for “Never Stop” and “Rocket Ship” earlier this year, watch them below.

In case you missed it, read our review of the album here.

Future Is Living It Up in the South of France in NSFW “Please Tell Me” Video
MusicsponsoredAugust 13, 2019