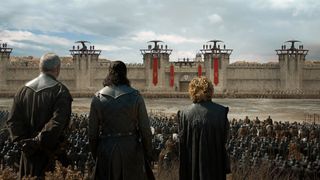 Following last night’s episode, HBO shares the official trailer for its forthcoming Game of Thrones: The Last Watch documentary. According to the network, the two-hour film serves as a “farewell to Westeros with the people who built the realm.”

HBO’s Game of Thrones: The Last Watch trailer kicks off with showrunners David Benioff and D. B. Weiss as they speak on family ahead of the last table reading. After getting a glimpse at the cast and crew, we then see behind-the-scenes clips surrounding some of the most pivotal moments from the eighth and final season of Game of Thrones.

Directed by Jeanie Finlay, HBO’s two-hour Game of Thrones: The Last Watch documentary will be a followup to the show’s final episode, premiering one week after the series finale on May 26 on HBO.

A farewell to Westeros with the people who built the realm. #GameofThrones: The Last Watch premieres May 26 at 9PM on @HBO. pic.twitter.com/Rr36LCtxiY