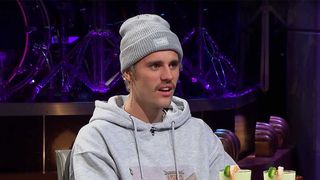 Last night, Justin Bieber stopped by The Late Show With James Corden to play “Spill Your Guts Or Fill Your Guts.” During the segment, Bieber and Corden ate scorpion yogurt, cow tongue, bird saliva, and other gross things instead of answering uncomfortable questions.

For example, the “Yummy” singer chose to take a shot of a shrimp and chili pepper smoothie rather than saying which country has the worst fans ever. Meanwhile, Corden drank bird saliva to avoid having to pick between Bieber and Harry Styles. The highlight of the game though has to be when Bieber chose between shaving his mustache and eating scorpion-filled yogurt.

The singer had to take a moment. “I like my mustache,” he told Corden. So, he chose to eat the scorpion yogurt, but it was so disgusting he couldn’t even swallow it. In hindsight, Bieber probably should have just let Corden shave it, since he got rid of the mustache anyway.

Watch the entire episode above.

What Have We Learned From 10 Years of Justin Bieber?
MusicsponsoredFebruary 19, 2020