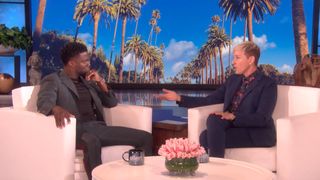 Last month, we’ve reported that Kevin Hart opted to step down as host for the 2019 Oscars following social media backlash due to decade-old controversial tweets. However, thanks to a trip to the Ellen Show, he might change his mind.

For the first time since stepping down as Oscars host, Kevin opens up to Ellen Degeneres about the rollercoaster ride of being hired to host the event, celebrating, then receiving a mountain of digital hate from fans. The comedian explains how he has apologized in the past for the same exact incident, and shares the reason for leaving the host gig is because he doesn’t want the cloud of hate to distract the audience from the prestigious Oscars night.

After, Ellen takes to Hart’s defense pleading him to reconsider hosting, and even goes as far as calling the Academy herself on behalf of him.

She states in the video below, “I called them (the Academy). I said, ‘Kevin’s on, I have no idea if he wants to come back and host, but what are your thoughts?’ And they were like, ‘Oh my God, we want him to host. We feel like that maybe he misunderstood or it was handled wrong or maybe we said the wrong thing but we want him to host. Whatever we can do we would be thrilled. And he should host the Oscars.’”

Ellen’s persuasion sort of worked. Hart was still tightlipped on his possible reinstatement, but revealed that he will “assess, just to sit in this space and really think, and you and I will talk before anything else.”

What are your thoughts on Ellen backing Kevin Hart? Should he reconsider hosting the Oscars? Let us know in the comments below.