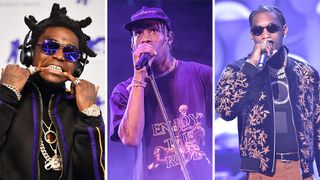 Kodak Black has no doubt been busy since being released from prison in August. After appearing alongside Gucci Mane and Bruno Mars on “Wake Up in the Sky,” the 21-year-old rapper returns with his anticipated new single featuring Travis Scott and Offset, titled “ZEZE.”

The triple threat track gives off clear tropical vibes for anyone still trying to hold on to summer, as production comes courtesy of D.A. Doman. Kodak, Travis, and Offset then deliver respective verses throughout the tune, which you can stream now above.

After listening to “ZEZE,” be sure to hit the comment section to let us know if you’re feeling it.