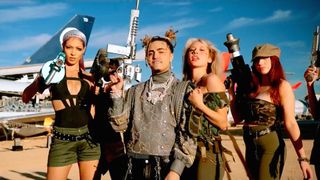 Fresh off dropping the music video for “Butterfly Doors” earlier in January, multiplatinum superstar Lil Pump is back with another visual, this time for his newest hit single “Racks on Racks,” taken from his forthcoming Harverd Dropout album due out February 22 via Tha Lights Global/Warner Bros. Records.

The BRTHR-directed video evokes a Mad Max-inspired setting with a Gucci-clad Pump partying it up in a desert, surrounded by video vixens wielding flame cannons and other weaponry. Also, a monster truck is added to the post-apocalyptic clip to further elevate the video’s already explosive setup.

Enjoy the new track above as Lil Pump continues to deliver his signature wild charisma and catchy hooks in the bassy-heavy production. Furthermore, Pump just received a “Best New Hip-Hop Artist” nomination at the 2019 iHeartRadio Music Awards, which is slated to air on March 14.