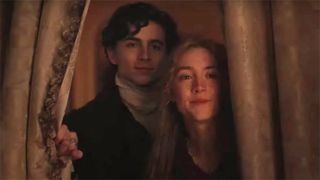 Writer-director Greta Gerwig calls on two of her Lady Bird castmates — Timothée Chalamet and Saoirse Ronan — to star in her adaptation of Louisa May Alcott’s iconic 1868 novel, Little Women. With the film due out later this year, today we receive the official trailer for the anticipated remake.

Gerwig’s Little Women is told from the perspective of Alcott’s alter ego, Jo March. The movie centers around the March sisters, four young women who are determined to live life on their own terms. Jo, Meg, Amy, and Beth March are played by Saoirse Ronan, Emma Watson, Florence Pugh, and Eliza Scanlen, respectively, as Timothée Chalamet stars as their neighbor Laurie. Laura Dern then portrays Marmee, and Meryl Streep is Aunt March.