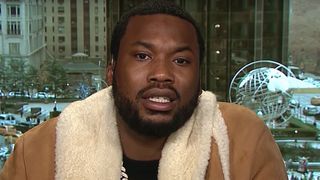 In a recent interview with CNN, Meek Mill discussed whether or not Jay-Z was going after Kanye West in that headline-grabbing “What’s Free” verse, alongside highlighting the importance of prison reform.

The verse in question appears on Mill’s most recent LP, Champions, and features Jay-Z rhyming, “No red hat, don’t Michael and Prince me and ‘Ye // They separate you when you got Michael and Prince’s DNA” —  bars that have since been interpreted as mocking West for wearing Trump’s “Make America Great Again” caps.

The line clearly meant don’t pit me against my brothers no matter what our differences are (red hat) now go pick up Meek album . Drake and Meek on there together .

Jay-Z himself has debunked the drama, stating the verse “clearly” doesn’t go after West, which Mill reiterated to CNN. “I think he actually just says, ‘Don’t let him separate us like they did Michael Jackson and Prince,’” he offered.

Mill further explained, “Kanye came out of nowhere and just went ‘red hat,’ and that was kind of like against everything we represent. I don’t know what [West] represents, but coming up in the hip-hop community, we came up fighting and fighting for our rights for a long time. What that red hat represents doesn’t really represent what we’ve been fighting for our whole lives.”

On the topic of prison reform, Mill stated that often people are kept incarcerated for crimes they didn’t not commit, while their bail costs are less than the price of keeping them behind bars in the first place. “I actually spent time with men that had 28 months in prison for $100 bail, and they weren’t even found guilty for their crimes, and $100 kept them in prison. We as taxpayers, even myself, had to pay money to keep guys like this in prison.”

Watch the full interview in the video above, and then share your thoughts on Mill’s points in the comments.

In other news, Lil Xan has checked himself into rehab for opioid addiction.

How Rappers Are Helping to Break the Stigma of Mental Illness
LifesponsoredJuly 12, 2019