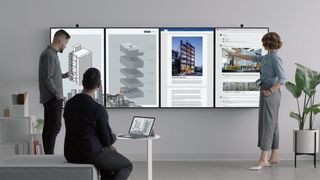 Microsoft has introduced its next-generation conference room display today with the Surface Hub 2, the successor to the original 2016 Surface Hub.

Say hello to Surface Hub 2. Transform any space into a collaborative one. #Surface #SurfaceHub2

Boasting a 50.5-inch multi-touchscreen display with thin bezels and greater than 4K resolution at a 3:2 aspect ratio, the giant device can now rotate to a portrait position, further adding versatility, and allowing users to utilize the best orientation for their content.

Say hello to Surface Hub 2. Transform any space into a collaborative one. #Surface #SurfaceHub2

Designed to be flexible and lightweight so workers can move it throughout an office, Microsoft is also working with furniture company, Steelcase, to produce stands and wall mounts for the Surface Hub 2. One of its more notable features is the ability to mount four displays together, which the company dubbed “tiling,” and it simply allows users to display different content side-by-side, as seen in the video above.

In terms of its hardware, the Surface Hub 2’s software will be based on a tweaked version of Windows 10. A dynamic collaboration scenario feature will allow multiple people to walk up to the Surface Hub 2, and log into the device using the built-in fingerprint reader. In addition, far-field microphones and 4K cameras implemented into the display will allow users to make video calls in either landscape or portrait mode.

While the company has not revealed tech specs for the new Surface Hub 2, or its pricing and release date, Microsoft did share that the device will be available in 2019.

For additional details, head on over to Microsoft.

Next up, this leaked Xbox controller is designed for accessibility.

Up to 40% off
UncategorizedsponsoredApril 2, 2020
Follow
Highsnobiety Design
What To Read Next
Load More
Search Results
Load More