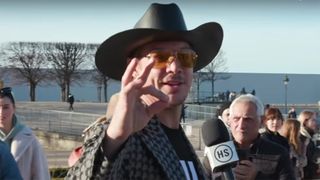 As day two comes to a close, we’re back with a recap of what went down at Paris Fashion Week Men’s FW20. On the second day we caught up with Jonathan Anderson and Heron Preston for exclusive interviews, in addition to getting celebrity reactions following Virgil Abloh’s latest presentation for Louis Vuitton. We also took some time to wander around outside Rick Owens’ PFW showcase to catch all the eye-catching street style.

During our conversation with Jonathan Anderson, he spoke on pulling inspiration from late artist David Wojnarowicz for the new JW Anderson collection. In addition, he explained why he cut down on the number of looks for the show, as well as why a large majority of the styles are purposefully open to interpretation.

After speaking with Anderson, we made our way to Virgil Abloh and Louis Vuitton’s FW20 presentation. Following the show, we spoke to Kerby Jean-Raymond, Ronnie Fieg, Jerry Lorenzo, Diplo, and more, as they gave us their impressions on the collection. Fieg, for one, said it’s Virgil’s best work with Louis Vuitton to date.

Heron Preston, meanwhile, touched on his collaboration with CAT and the collection’s intent to symbolize change. The designer also discussed remaining true to who he is and his message of sustainability for the brand.

Watch the day two recap above.