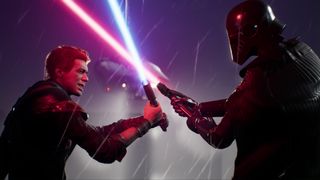 With Star Wars getting a new film from Marvel’s Kevin Feige, EA joins in on the galactic hype train by dropping an action-packed campaign trailer for the upcoming Star Wars Jedi: Fallen Order game.

The third-person action-adventure title follows Cal Kestis, one of the last remaining Jedi. He’s running from the Galactic Empire, who’s on a mission to seek out and destroy all remnants of the Jedi Order. Sucks to be a Jedi. In the game’s campaign, Cal searches the galaxy for and why the Empire will stop at nothing to bring him down.

In the 2-minute trailer, we get a look at several different monsters and enemies our protagonist will face to discover the truth, including a mysterious bad-ass Sith lord with a red lightsaber. Whoever they are, and whatever their motif, they create some epic lightsaber duels. Watch above.

Star Wars Jedi: Fallen Order will be available on Xbox One, PlayStation 4, and PC this holiday season, November 15, 2019.

Learn to Use the Force in First Trailer for ‘Star Wars Jedi: Fallen Order’
LifestylesponsoredApril 15, 2019