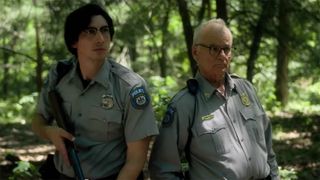 The greatest zombie cast ever disassembled. Watch the trailer now for #TheDeadDontDie, a new film from @jimjarmusch. In theaters June 14th. pic.twitter.com/SYrbZCaEs6

The Dead Don’t Die stars Adam Driver and Bill Murray as two police offers who are forced to deal with a local zombie outbreak. For now, no further plot details have been given, but we do know that the film boasts a star-studded cast, as Tilda Swinton, Chloë Sevigny, Steve Buscemi, Danny Glover, Caleb Landry Jones, Rosie Perez, Iggy Pop, Sara Driver, RZA, Selena Gomez, Carol Kane, Austin Butler, Luka Sabbat and Tom Waits feature alongside Driver and Murray in the anticipated picture, which was shot in upstate New York.

Jarmusch has previously worked with Driver, Murray and Swinton, so it will be interesting to see the culmination of all four collaborating on the same project. Murray, for one, says Jarmusch has “written a zombie script that’s so hilarious.”

Press play above for your first glimpse at The Dead Don’t Die, which is due out June 14.