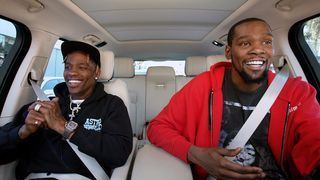 Last week’s Carpool Karaoke episode with Snoop Dogg and Matthew McConaughey will be a tough one to beat, but Travis Scott and Kevin Durant are pure entertainment in the latest installment of the Emmy-winning series.

Just like every other Friday, Apple unleashes a new episode of Carpool Karaoke, this time starring the Grammy-nominated Texas rapper and back-to-back NBA champion. While cruising the streets, the two entertainers compare their career paths and rap some of Travis’ biggest hits in “Sicko Mode” and “Goosebumps.” One of the highlights from the program comes when Travis and Kevin belt out Rick James’ ’80s hit, “Super Freak.”

This is certainly one episode of Carpool Karaoke you don’t want to miss. After watching a preview above, visit Apple to peep the segment in-full.