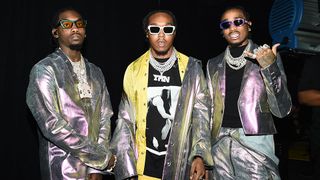 Migos and Young Thug debuted a new track with Travis Scott at the second annual Astroworld Festival in Houston.

The unreleased track centers around the Auto-Tuned hook “we don’t give a fuck” and features Murda Beatz‘ producer tag at the start. Watch below.

Genius user @SimonRemish first noticed the track when a snippet appeared on Instagram live ahead of the Astroworld Festival performance.

Migos and Travis Scott have collaborated on multiple songs in the past. Last month, a track titled “Speaking of the Devils and Angels” surfaced online featuring verses from each Migos member, as well as bars from Scott. Unfortunately, the track has since been removed.

That wasn’t the only surprise of the festival. During his headlining set, Scott brought out none other than Kanye West. West performed “Follow God,” his latest single off Jesus Is King, and “Can’t Tell Me Nothing” from Graduation for the surprised audience. Watch footage from the surprise performance here.