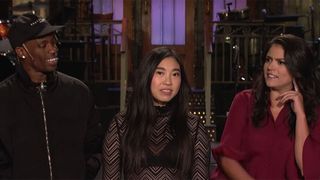 After last week’s revelation that Travis Scott would be the musical guest on the October 6 episode of Saturday Night Live, NBC has just dropped a hilarious promotional video for the episode.

In the clip, La Flame is joined by Crazy Rich Asian‘s Awkwafina who will serve as the episode’s host, along with mainstay cast member Cecily Strong. Over the course of about a minute, the three exchange banter, with Travis Scott notably adlibbing over Strong’s attempts at freestyling. Watch it all go down in the video above.

Scott is set to join the cast of SNL on Saturday, October 6 to ride the wave of Astroworld and promote his upcoming headlining tour in support of the album.

In case you missed it, last weekend’s episode featured Kanye West as the musical guest, and reportedly held the cast hostage backstage with a pro-Trump rant.

In other music news, watch Quavo perform in a neon Lamborghini on ‘Fallon.’