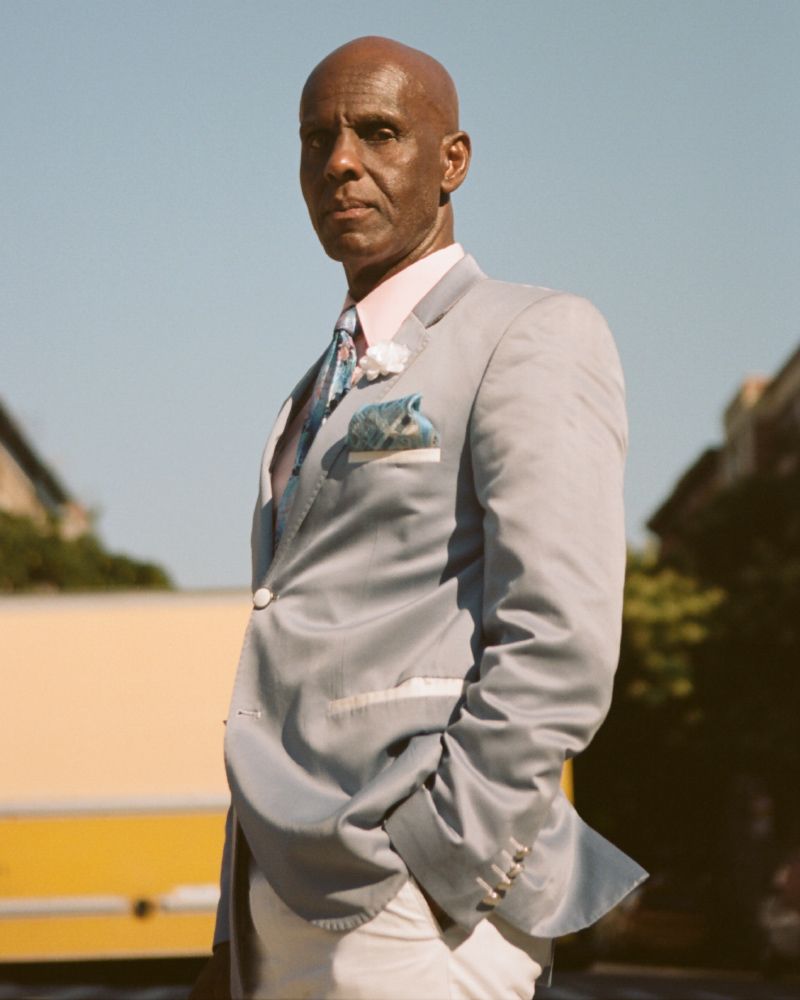 Day is born in Harlem New York. Growing up on 129th and Lexington Avenue he was born to a civil servant father and a homemaker mother. A skilled gambler by age 13, it was this success that helped Day fund his first store.

Day worked for Harlem newspaper; Forty Acres and a Mule.

As part of a program from Columbia University, Day toured Africa for six years.

Day returned to New York and sold shoplifted items from his car.

It was then that Dan faced prejudice as he ventured in his attempts to be a clothing wholesaler, struggling to buy the textiles he needed because of his location and race. Instead Dan began to create his own designs from scratch, creating knock-ups using bootlegged fabrics he designed himself.

Day’s trademark at the time was bold usage of logos from high-end brands like Gucci, inspired by the flamboyant fashion of Rat Pack icons like Frank Sinatra and Sammy Davis Jr., Day boasted clients including drug kingpin Alpo Martinez.

Dapper Dan’s first venture into hip-hop and streetwear fashion comes with the styling of LL Cool J and he became known as the hip-hop atelier. Dan designs custom Gucci tracksuits for Eric B. & Rakim spotted on the covers of the seminal album Paid in Full . He also created looks for The Fat Boys, Salt-N-Pepa, KRS-One, Bobby Brown, Jam Master Jay as well as Mike Tyson and famously athlete Diane Dixon.

Tyson, wearing one of Dan’s “knock-off” Fendis, gets into a brawl with Mitch Green outside Dapper Dan’s store, putting the counterfeit looks into the media spotlight for the first time and eventually leading to the demise of the store. The use of brand logos caught the intention of the likes of Fendi, who pursued legal action in 1992, with the shop closing down for good.

Dan continues to work as an underground designer and begins outfitting Floyd Mayweather.

Day’s career is revitalised thanks to a Gucci call back. Gucci’s creative director Alessandro Michele designs a jacket based on a well-known Dapper Dan design he created for Diane Dixon nearly 20 years earlier.

Michele replaced the original Louis Vuitton adorned balloon sleeves of the fur-lined jacket with the double-G Gucci logo. When Dixon shared images of her design next to the original, social media reacted with claims for Dapper Dan to receive some credit. With the support of Michele and Gucci CEO Marco Bizzarri, Day and the Italian brand partnered for a line of menswear.

Day opened a new atelier on Lenox Avenue in partnership with Gucci, Dapper Dan of Harlem, making it the first luxury fashion house store in Harlem.

DAP GAP Sold Out in a Snap — What Happened?
CulturesponsoredMarch 11, 2022

DAP GAP Is the Collab We Deserve
CulturesponsoredMarch 7, 2022

Sponsored Story
Around the World in 45 Years: A Brief History of MCM
DesignsponsoredMarch 21, 2021

Dapper Dan on How Luxury Learned to Love Hip-Hop
StylesponsoredSeptember 23, 2020