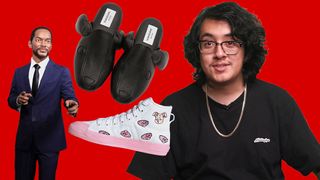 Following an episode with Sean Wotherspoon, 21-year-old singer-songwriter Cuco is our latest guest on Cop or Drop. As is customary with the series, Cuco reveals whether he would purchase or pass on some of the hottest items of the moment.

Unlike some of our previous guests, Cuco is seemingly more lax with his spending habits, as there isn’t much we showed him that he wouldn’t buy. We see the rising musician reacting to the customizable Cactus Plant Flea Market x Nike Blazers, Palace’s cow hair Chelsea boots, some New Balance trail runners, and a Loewe Marilyn Monroe shirt, in addition to some more obscure items such as a life-size Will Smith statue, a signed Guy Fieri cookbook, and TGI Fridays’ chicken parmesan sliders.

To find out what Cuco is down to spend his money on, simply press play above.