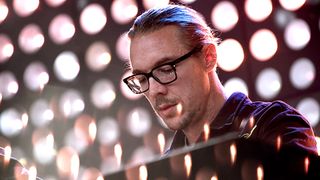 Octavian has been high in demand since he dropped his SPACEMAN mixtape back in September. After collaborating with producers Mura Masa and Take A Daytrip, the grime MC has linked up with the legendary Diplo on the track “New Shapes.”

“I met Octavian at a party in London,” he said in a press release. “We took a photo and I never thought I would see the kid again. Over the next six months I kept hearing his name and seeing him on great songs. I tried to stay in touch even though he had another twelve phone numbers since we met. Finally, he was stuck in L.A. for a while and it was easy to pull up on him. After a few weeks we nailed this song and I’m glad it gets to finally see the light of day. Big up to Jim-E Stack for producing this with me.”

This single is the follow-up to the previously released song “Boom Bye Bye” featuring Niska. Both tracks are featured on Diplo’s forthcoming Europa EP due out on February 22 via Mad Decent. While you stream the tune, revisit our review of Octavian’s 2018 project.