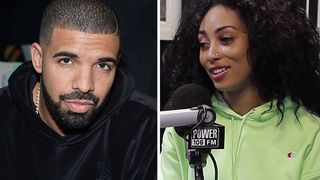 “Kiki” from Drake’s hit song “In My Feelings,” real name K’yanna Barber, recently sat down for an interview with Power 106 FM in Los Angeles. Although the internet’s finest investigators had already succesfully identified “Kiki,” this marks the first time Barber has publicly discussed her unexpected, newfound fame thanks to the Scorpion rapper.

In the video above, Barber recalls the first time she heard the now-iconic line “Kiki, do you love me?” and confirms that she is in fact the “Kiki” Drake is referring to in the song. The Oakland-hailing dancer and rapper explains she met Drake through Kamaiyah, who she used to dance for before pursuing her own rap career.

Previously, rumours circulated that Kim Kardashian was “Kiki,” after Nick Cannon hinted that she and Drake may have been an item in the past. As a result, Kim’s husband Kanye West went off on Cannon, Drake, and Tyson Beckford in a series of now-deleted Instagram posts.

Revisit the video for “In My Feelings” below.

In other music news, Migos are being sued over their song “Walk It Talk It.”

This Is How Snoh Aalegra Really Feels About Astrology, Empaths & Toxic Energy
MusicsponsoredDecember 5, 2019