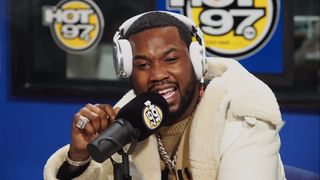 Once upon a time, there was a war going on between Drake and Meek Mill. Now, the rappers have never been on better terms and even collaborated on a song together for Championships. This morning, Meek Mill made a guest appearance on Funk Flex’s Hot 97 show where he freestyled over “Back to Back,” the legendary diss track that came out at the peak of his beef with Drake in 2015.

Obviously, it was all in good fun since there are no hard feelings between the rappers anymore. Scroll down for the six most promising lines from Meek Mill’s version of the track, and watch him do it live while smoking a “cigar” at the 3:55 mark in the video above.

He still keeps it street post-prison:

“My old opps they super mad/ We left them pourin’ Henny up/ ‘Cause they homies got whacked/ We brought Maybachs/ Came through their strip, no tint, laid back/ N****s ain’t no threats, no caps they rats/ And when they homies got checked, they ain’t never get back”

From rags to riches:

“We go to war for that fettuccine/ Young n****s turning Buicks into Laborghinis/ I took bitches from the projects to Santorini/ 350 on me now, I ain’t wearing Yeezy/ Billy on my wrist, milli on my bitch”

“Mafia, everything Mafia/ Salmon over lobster, we don’t even eat tilapia/ I done got bougie, more confident and cockier/ Since I got some money, hoes suck that d*** sloppier”

Warning others of his return to the rap game:

“This a new level, new devil/ Patek look like it got two bezels/ Who let you run these streets thinking you special?”

In other news, Blood Orange dropped a video for “Dagenham Dream.” Peep it right here.