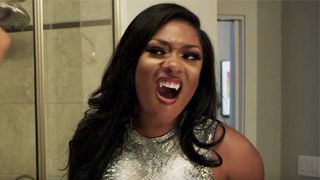 Just in time for Halloween, Megan Thee Stallion has released the second episode from her new horror web series Hottieween.

Taking place in a fictitious Stallion County, the series sees Megan Thee Stallion play a private investigator trying to solve a murder after a group of “fuccbois” torments the town. In this new episode, called “Suck a Neck,” The Stallion has turned into a vampire, using her newfound powers to rescue all of her “hot girls.” In case you missed the first episode, watch it below.