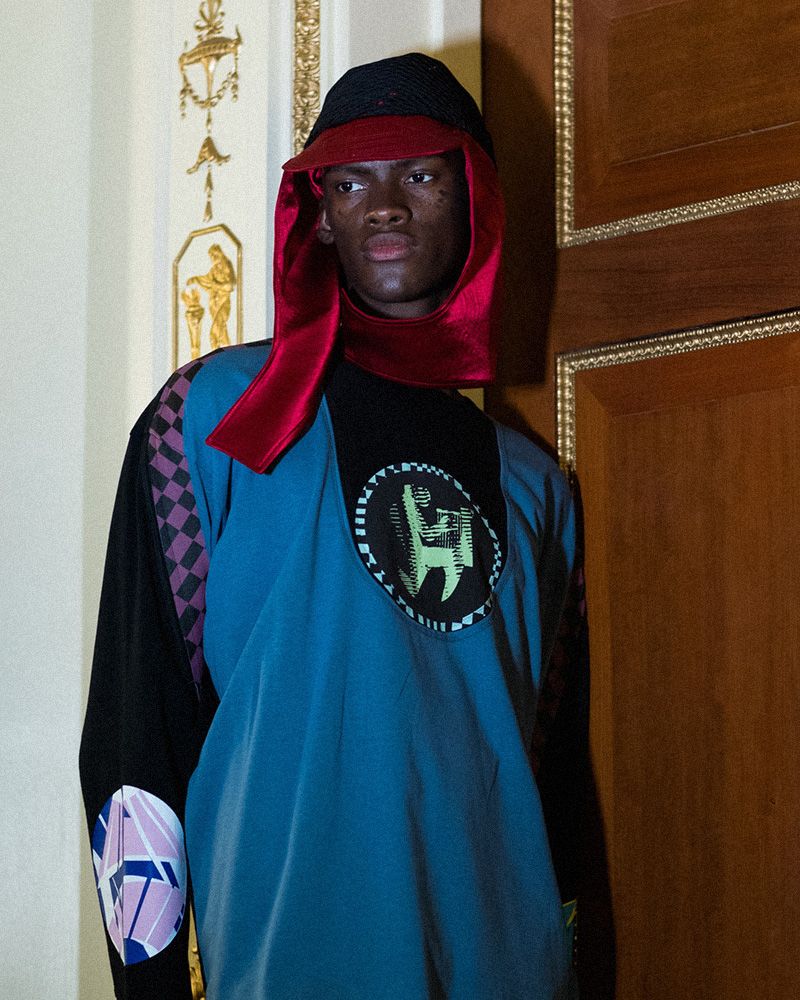 Kiko Kostadinov is a Bulgarian born, London-based designer. He rapidly rose to prominence after his Central Saint Martins’ (CSM) MA Fashion graduate show in 2016, receiving support from the prestigious British Fashion Council scheme NEWGEN MEN. Early collaborations with streetwear brand Stüssy and his much-hyped Asics sneaker collection helped propel the rising designer to success. A 2013 collaboration with Stüssy in partnership with website SHOWstudio boasted sweatshirts and bucket hats, cut up from standard pieces and reconstructed with visibly displaced fabric panels. Kostadinov followed up with a further two collections with Stüssy in 2015. The now-coveted collections for Stüssy’s 35th anniversary and major in-store collaboration between Stüssy and Dover Street Market included a range of one-off reconstructed sweaters, sweatpants, hoodies and hats, featuring overlocked seams, raw hems and fraying. The designer’s 2016 graduate collection saw his movement away from streetwear’s romantic fascination towards a more rugged workwear silhouette – echoing Fordist work attire and brands like Carhartt. In 2018 the Kostadinov Fall/Winter 2018 added warmth and texture to the designer’s collections, as well as his debut womens capsule. Kostadinov also added a new project to his portfolio in 2018 – the lesser known London-based AFFIX. Co-owned by MACKINTOSH head designer Taro Ray, creative consultant Stephen Mann and Gimme Five founder, Michael Kopelman. The brand originally began as a show on pirate radio station Know-Wave but debuted its first fashion collection in January 2018 with an exclusive collection of workwear-heavy shits, sweatshirts, tees and hats – all featuring bold graphics.

Show
Who has Kostadinov collaborated with?

The designer’s much-hyped ASICS Gel-Burz collab has been such a hit it’s now what the designer is best known for. Several more have followed since – with each collection met with hype and success.

Kiko Kostadinov Gives the ASICS GEL-Lyte III Its Most Drastic Makeover Yet
SneakerssponsoredNovember 12, 2020

Kiko Kostadinov & ASICS Are Rewriting the Rules of Collaboration
SneakerssponsoredOctober 1, 2020

Blazers That Are Actually Cool
SelectssponsoredSeptember 16, 2020