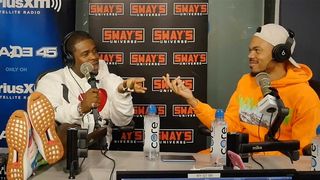 Fresh off the release of Floor Seats, A$AP Ferg made a promotional appearance on Sway in the Morning, where he spilt the tea on making the project, his career moves, fashion and A$AP Rocky’s recent legal battles. The interview took an amusing turn when Chance the Rapper popped up unexpectedly. Ferg challenged Chance to an impromptu freestyle. Watch the full freestyle above.

Ferg set the tone for the comedic back-and-forth– rapping about a fictitious woman with whom they had both hooked up. “That was before you was listening to gospel music,” Ferg rapped. “And that was when you used to be rockin’ to it, on the tour bus.”

The rappers kept the tête-à-tête going, even as the DJ switched up the beat on them. From Outkast’s “Elevators” and  JAY-Z’s “Where I’m From,” to Missy Elliott “Sock It 2 Me,” Ferg and Chance never lost the plot, rapping off the top of their heads in true hip-hop fashion.