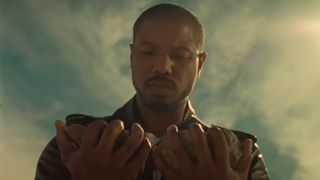 Michael B. Jordan is the first global face of Coach menswear and stars in another new ad for the brand, following the unveiling of its Spring 2019 men’s campaign in January.

Dubbed, “Words Matter,” the ad is a short film directed by Academy Award-winner Spike Lee, as it spotlights Michael B. Jordan draped in Coach attire in a western setting while roaming the desert. The actor is seen riding a motorcycle and stops to scope the landscape, then casually picks up rocks that are detailed with negative words like “Hatred” and “Evil” written on it. Jordan eventually takes action into his own hands by replacing the bad rocks with postive words instead like “Love” and “Dream.”

They can lift you up or they can put you down. In other words, words really do matter. We choose 𝐎𝐏𝐓𝐈𝐌𝐈𝐒𝐌, 𝐂𝐎𝐔𝐑𝐀𝐆𝐄 and above all 𝐋𝐎𝐕𝐄. In collaboration with and starring #MichaelBJordan, a new #SpikeLee Joint. What words do you choose? #WordsMatter #CoachNY

According to Coach, the brand explained in a press release that the film “features a strong poetic narrative that speaks to Coach’s values of inclusion, optimism and courage.” Adding, “emphasizing the importance of these values today, its purpose-driven concept reinforces what the brand stands for.”

“Words Matter” is the first of a collection of videos by Coach as part of the campaign, and the series will also feature Spike Lee’s children, Jackson and Satchel, as well as artist Whisbe and Brooklyn Nets player Spencer Dinwiddie. Each will share their personal points of view on why words matter.

Click play above and enjoy the short film above.

The 13 Best & Most Influential Nike Ads of All Time
SneakerssponsoredJune 18, 2019

Michael B. Jordan Talks Anime, Inclusivity in Hollywood, and His Coach Collab
StylesponsoredSeptember 25, 2019