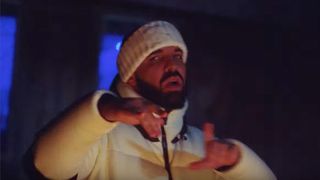 Fresh off of filming a new video with Future, Drake has now unveiled a brand new song and “War,” and a video to go with it. In the song Drake addresses his relationship with The Weeknd and lets the world know that the beef they had is now squashed.

The song is a freestyle from Oliver El-Khatib’s El-Kuumba Tape Vol.1, and Drake raps: “And the boy that sound like he sang on Thriller / You know that’s been my nigga, yeah / We just had to fix things, family, 6 tings, we can’t split up.”

The video is directed by Theo Skudra and sees Drake and his OVO crew hitting the slopes, before partying at a chalet in the mountains.

The feud between Drake and The Weeknd isn’t the only beef that has been squashed recently. JAY-Z and Kanye West and Joe Budden and Quavo, made up at Diddy’s 50th birthday celebrations.

Check out the video and listen to “War” above.