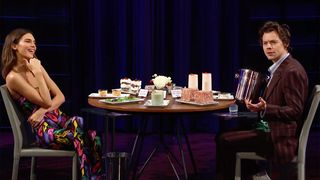 On a recent episode of The Late Late Show with James Corden celebrity guests (and exes) Harry Styles and Kendall Jenner interviewed each other. The former couple went head-to-head in the foul game “Spill Your Guts or Fill Your Guts,” where they had to answer intimate questions or eat something disgusting instead. Watch above.

Harry Styles explained the game, “The producers have not shown us the questions, right? I’ll choose what food you have to eat if you don’t want to answer the question.” Faced with a lineup of revolting food, from cod sperm to bug trifle, and equally bellow-the-belt questions, the game quickly heated up — starting with Harry forcing Kendall to rank her siblings’ parenting skills.

Things got seriously awkward when Kendall asked Harry, “What songs on your last album were about me?” Harry refused to answer the question and opted to eat cod sperm instead.

The tables turned when Harry asked Kendall “Who’s the most unlikeable supermodel?” Jenner who claimed to have the answer ready but wouldn’t reveal it on TV downed a rank salmon smoothie.

Watch the full clip above to see the exes ask and dodge some more cringe-worthy questions.