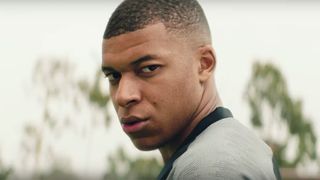 In Nike Football’s The Bet, “The Champ,” Mbappé, and “The Kid,” Cook, take part in a crossbar challenge, as the winner gets Nike’s all-new Mercurial Superfly 360 boot. Makena steps up first to nail the crossbar and put the pressure on her opponent, Kylian. The 20-year-old football sensation then fails to hit the crossbar on his attempt, leaving Cook with the winning prize, the Mercurial Superfly 360.

I promise I’ll be careful with them @k.mbappe ?? #mercurial

These Tom Sachs Nike Football Concepts Are Next Level
SneakerssponsoredApril 28, 2020

Kylian Mbappé Is by Far the World’s Most Valuable Footballer
LifestylesponsoredJanuary 9, 2020