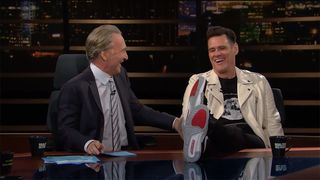 The actor and comedian was on Real Time With Bill Maher when he put his Don C Nike Air Jordan Legacy 312-clad feet up on the desk, describing the kicks as “freedom-friendly Nikes.” Carrey specifically shouted out Nike and Kaepernick, commending them for their “fantastic choice.” Check out the footage above around the 35-second mark.

Nike’s “Just do it” campaign has made clear the company’s decision to stand behind Kaepernick and his “take a knee” protests. Although that choice has drawn criticism from conservatives, including including President Donald Trump, a great many people — Carrey included — came out in support of the Swoosh and the former NFL player.

Carrey is no stranger to taking a political stance in public. Back in April, the actor shared his anti-Trump paintings on Twitter, which you can check out here.

Watch the entire interview above and don’t forget to leave your thoughts in the comments below.

A Year On, Nike’s Kaepernick Stand Paid Off
SneakerssponsoredSeptember 7, 2019

Colin Kaepernick Gave Us a Glimpse of His Rumored Nike AF1 Collab at NFL Workout
SneakerssponsoredNovember 17, 2019