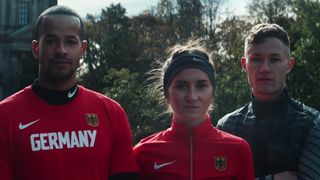 Nike launched its first ever German “Just Do It” campaign today, highlighting a new generation of athletes who go beyond winning, and celebrate those who work hard on and off the pitch to move society forward through the power of sport. “Du tust es nie nur für dich” (“You never do it just for yourself”) is the slogan of the campaign inspiring athletes to be more than athletes, but heroes as well.

The campaign film Helden, directed by John Hillcoat, features real athlete heroes who are fighting to make a difference in our society, including boxer Zeina Nassar, who fought for female boxers to compete in a hijab. She won. Others include basketball player Moe Wagner, football players Giulia Gwinn, Mario Götze, and more.

Along with the Helden film, Nike Germany is launching a legacy project, “Just Do It Sunday” on November 10. Nike members will be able to participate in sport challenges, events and activations and Nike will convert your activity into a donation for one of our many partner sport organizations in Berlin and beyond. Activations across Just Do it Sunday and beyond are open to all across the country.

Watch the John Hillcoat’s Helden film above. For more information on Just Do It Sundays, head to Nike’s site here.

Nike Just Restocked a Bunch of Styles on SNKRS & More Could Follow
SneakerssponsoredApril 1, 2020
What To Read Next
Load More
Search Results
Load More