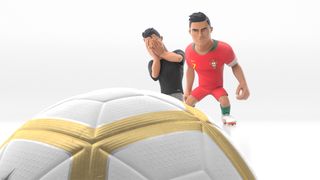 Cristiano Ronaldo, who already has four goals in just two 2018 World Cup matches, is the subject of Nike Football’s latest campaign, “Believe.” This week the Swoosh is sharing a series of short films, titled Talking to the Ball.

The clips feature Ronaldo, widely regarded as one of the two best football players in the world, discussing his communication with the ball and a bicycle kick that he says was “probably the best goal so far in my career.”

See above and below to witness the Portuguese superstar discussing his craft.

In related news, that hilariously bad Ronaldo statue has finally been replaced.

You Won’t Believe How Much Money Cristiano Ronaldo Makes Off Instagram
SportssponsoredOctober 18, 2019

Cristiano Ronaldo Is Using an iPod Shuffle From 2010 & People Are Loving It
LifestylesponsoredJanuary 7, 2020