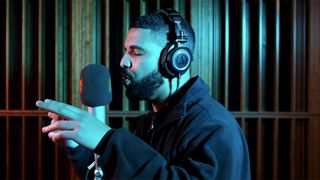 It’s only been a week since Drake released his new album Scorpion, but he’s already back in the booth. Drake made an appearance on Link Up TV with bars that are sure to stir up controversy. Although Kanye West claimed that the beef between his G.O.O.D. music affiliate Pusha-T and Drake was “dead now” back in June, it seems that Drizzy still has some veiled shots to fire at Kanye West.

Some of Drake’s verses seem to continue the back-and-forth that was reignited on Pusha-T’s “Infrared,” lead to Drake’s “Duppy Freestyle,” and concluded with Pusha’s “The Story of Adidon.”

Already on the first verse, the Toronto rapper spits bars about an anonymous enemy, which could be a reference to the “overwhelming” Pusha diss track that J. Prince told Drake not to release: “I know so much shit that I cannot expose / I keep it inside and I laugh on my own.”

Later on in the freestyle, it gets a little more personal: “They wanna link when they got no chunes / They too worried about sellin’ out shoes / I don’t give a fuck about jeans or crap / Or going to Milan or going to the Met.” Firing shots at rappers who focus too much on fashion, this could easily be a jab at West’s YEEZY line. Although Kanye West skipped the Met Gala this year, he was spotted in Milan late 2017, as Genius points out. It’s also worth noting that West conveniently forgot to credit Drake on “Yikes” from his new album ye.

Do you think Drake is firing shots at Kanye West on his “Barz Freestyle”? Let us know in the comments below.

In other music news, BROCKHAMPTON dropped a new song and video called “1999 WILDFIRE.”

Kanye, Drake & Cardi B Get Trolled More Than Any Other Artists on Twitter
MusicsponsoredFebruary 20, 2020