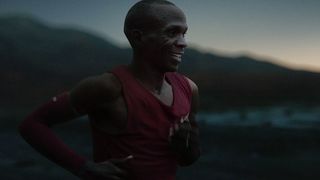 On Sunday Eluid Kipchoge ran the fastest official marathon time ever, clocking in at 2:01:39, bypassing the previous world marathon record of 2:02:57 en route to winning the 2018 Berlin Marathon. It was the first time in five decades that a record had been beaten by over a minute.

When Kipchoge crossed the finish line on September 16 — in fact for all 26.2 miles of the race — the Kenyan was wearing his Nike Zoom Vaporfly 4%. The sneaker is described by Nike as its fastest ever, and was recently unveiled to much fanfare.

The non-Flyknit version was also one of the sneakers that was featured during Nike’s “Breaking2” race back in early May, which was organized in an to attempt to complete a marathon in two hours — a feat that has never been achieved.

The new world marathon record, while of course a huge achievement and testament to Kipchoge’s talent and hard work, shows that Nike is on the right track when it comes to developing next-level running shoes and providing their athletes with the best tech possible.

To celebrate Kipchoge’s determination to be the fastest, Nike produced a film called Fastest Ever film, which you can check out above.

In addition, the runner sat with the Swoosh after the race to talk about the marathon, his achievement, and his shoes. Check out some of the questions below.

You broke the World Record. When did you know during the race that this time it is going to happen?

I was sure I would be able to set up a new record after 30 kilometers.

You are running in a shoe that was developed with you. How much time do you think you could shave off because of it?

Actually, the shoe is for every runner out there, not only for me. I tested it and Nike took up my feedback. I contributed in making a shoe that is faster than any shoe before. But it is still the runner that needs to run fast.

The sub 2 barrier is still on. From your record today, it is still 99 seconds to get below the magic mark. What do you think must happen, that this barriers can be broken in a regular/ official street race?

Actually, it is only 25 seconds. It is no rocket science to break this barrier. You simply have to believe in it, you need a great team that believes in it and in you, you need the perfect shoes and you need to be stronger than any runner before. Then everything is possible.

How was the atmosphere along the race track?

People were amazing. Without them cheering it would have been much harder at the end. Their support was music in my ears.

Do you feel like you achieved your “crazy dreams” today?

What are the three characteristics a runner needs for running a marathon?

Steady and consistent training, passion and self-discipline. Self-discipline is about focusing and living a simple life.

Do you think that you can run even better than the record today?

I think no human is limited. Everything is possible, and records are there to be broken.

Nike’s Latest Running Shoes Are So Good, They Might Actually Be Too Good
LifesponsoredOctober 4, 2018

The Future of Running According to World’s Best Athlete Eliud Kipchoge
LifesponsoredMay 10, 2019