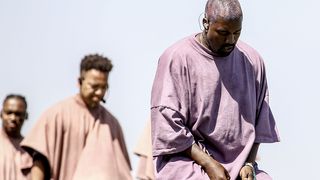 Kanye West is the latest rapper to fall victim to a slew of leaks. Yesterday, the track “Law of Attraction” leaked online, the latest highly-anticipated YANDHI single to make its unauthorized way online. While the album’s release date has been in limbo for a year now, it seems fans are making the collective effort to brazenly “group buy” stolen material from the YANDHI sessions.

“Law of Attraction” appeared online yesterday under the incorrect title “Chakras” — listen to it above. The song is produced by a collective of artists affiliated with Timbaland. A rep of the collective, Angel Lopez, released on open letter on Instagram about how paralyzing leaks are to the music industry, saying, “When music is leaked, the essence of our collaborations, our crafts, and our livelihood are jeopardized.” He continues, “The leaking of music isn’t for the fans or for the love of music; it’s an invasion of privacy.” Read the full statement below.

Previously, the YANDHI tracks “Bye Bye Baby,” “The Storm” and “Alien / Space X” already leaked. This is reportedly due to a movement of Kanye fans crowdfunding to leak unreleased demos from the upcoming album. There is no news yet who could be behind the leaks and no comments from Kanye yet. It remains unclear what will happen with the songs that have already leaked.