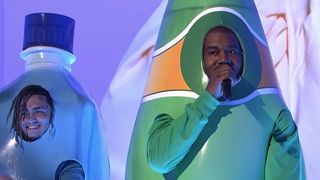 Kanye West and Lil Pump broke the internet with their hilariously strange “I Love It” music video several weeks ago. Now, performing the song live on Saturday Night Live, the duo took things a step further when they rocked the stage dressed as water bottles.

Whereas in the original music video, the two artists were wearing boxy, oversized YEEZY costumes, this time West and Pump made headlines for dressing like Perrier and Fiji water bottles respectively.

The YEEZY outfits from the music video spawned a hilarious dance challenge. Only time will tell if these water bottle-themed costumes will do the same.

Watch the entire performance above and leave your thoughts on West and Pump’s ridiculous (or genius?) outfits in the comments below.

Next, if you missed the original costumes, check them out in the official “I Love It” music video below.

If you were ever wondering how to make your own “I Love It” costume, look no further than this video here.