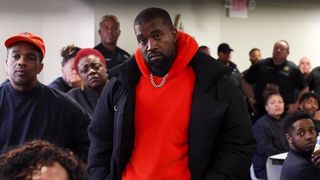 Kanye West brought his Sunday Service inside the Harris County Jail and the Baker Street Jail in Houston yesterday. Watch above.

West and his choir delivered songs from the Jesus Is King album for 200 male inmates at one facility before making their way to the smaller women’s facility, according to CBS.

Say what you want about the man. But @kanyewest and his choir brought some light to people who needed it today at the Harris County Jail. pic.twitter.com/ornRlEldNP

Fox News reports that Harris County Sheriff Ed Gonzalez quoted Kanye, “This is a mission, not a show,” a sentiment bolstered by his ongoing involvement with prison reform. For Kim Kardashian’s 39th birthday he donated $1 million to charities working to improve the US prison system.

Tomorrow, West will bring his largest every Sunday Service to televangelist Joel Osteen’s megachurch in Houston, Texas. He is expected to perform before a 45,000-person strong congregation, in addition to Osteen’s huge TV audience, which counts 10 million people in America alone. During the service, West will speak for 2o minutes on the “significant adversity” he has faced in life.

Kanye’s Sunday Service at Joel Osteen’s Houston Megachurch Will Be His Biggest Yet
MusicsponsoredNovember 13, 2019