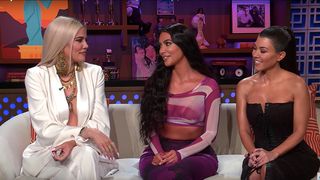 Kim Kardashian has confirmed that she and Kanye West are expecting a fourth child via surrogacy, revealing that the baby is a boy.

Speaking to Andy Cohen on Watch What Happens Live, Kardashian said “Yes” when asked if she was “working on another child.”

Rumors of the pregnancy started to circulate in early January because, according to Kardashian, “I got drunk at our Christmas Eve party and I told some people. I can’t remember who I told because I never get drunk.”

Kardashian didn’t reveal the due date but said that it was “sometime soon.”

In other music news, Earl Sweatshirt says he’s “excited to be free” from Columbia Records in new interview.

This Is What Kim Kardashian & Kanye West Order at McDonald’s
AdvertisingsponsoredJanuary 31, 2020

This Is How Kim Kardashian & Kanye West Are Decorating Their Home This Christmas
DesignsponsoredDecember 9, 2019
Follow
Highsnobiety Music
What To Read Next
Load More
Search Results
Load More